Some thoughts about our newly elected president.

I didn't vote for him. His "change we can believe in" seems to be one of expanded government, and I'm firmly in the "small government is good government" camp. But I can certainly understand his appeal, and frankly, I wasn't very enthusiastic about the prospect of a McCain presidency, either.

Did race play a factor in the election?

Blacks voted 90% for Obama, and Hispanics even higher, apparently. Of course, that wouldn't have won the election for him. A majority of white Americans voted for him as well. I'm sure a percentage of those votes were specifically because Obama is African-American. (A parallel might be former Governor Mitt Romney of Massachusetts. I bet he got a lot of votes from people who voted for the "Mormon" just because he is a Mormon, and they're openly tolerant of that.)

Is it cool that we'll have a black man for president?

IMO, it's FANTASTIC! (I just wish he shared my "conservative" vision.)

It is a huge step toward the realization of the "dream" so eloquently voiced by Dr. Martin Luther King, Jr., more than 40 years ago. 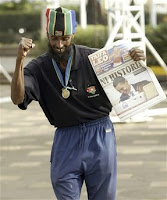 Rightly or wrongly, America moved up several notches in how the world views us, literally overnight.

Also - and I hope this doesn't sound racist but - IMO, young black men haven't had a huge selection of positive role models. Obama fills that bill nicely. A young, successful, smart, articulate, family-oriented black man. And now he's the leader of the Free World! (I don't think professional athletes, celebrities, musicians and gangsters are often good role models, no matter what color they are.)

Here's a question... why did Obama want to be president? Boy howdy, he sure inherited a mess! He's got his work cut out for him just fixing what's broken, let alone adding new services. There may be a heavy burden for the most wealthy 5% of Americans, and of course, Joe the Plumber. (Remember - Obama said out of his own mouth that 95% of us would NOT see a tax increase. I'm going to hold him to that.)

In his victory speech, Obama promised to be president for all Americans, not just those who share his vision and voted for him.

I hope he leads this country in a direction that's pleasing to God. (If you don't share my faith, this will seem like superstitious hokum, but I don't think we can expect God to watch out for us, if we turn our back on Him.)

I wish Obama total success, and will be praying for him.

Time will tell. Like the man said on the radio this morning, "America wanted to throw the bums out. But if Obama oversteps, he could be tomorrow's bum."

In the meantime, to all the naysayers and finger-waggers, I say, shut up and let the man work for awhile! I'm giving him the benefit of the doubt. Start yellin' if you don't like the way he's working.

I also say, God bless America and President Obama! Please!
Posted by Bikeboy at 9:32 AM

Very well said!
Our new president will have a lot of work to do, and I pray that he does the right things.
As long as there is no super-majority in the senate, our checks and balances will continue to work, and this country will still be the greatest on earth.
God bless America, and President Obama!

I echo your sentiments. I hope Obama is the savior he is alleged to be. I just ask, "At what cost does our salvation come? If it's at the cost of democracy, capitalism and freedom, the cost is too high. Hopefully, Oprah who was so tearful at Obama's "coronation" will be willing to foot the bill for welfare and medical care for the rest of the country in the new "take from the rich and give to the poor" style of economics.

I will give him my full support until he gives me reason not to. The man is inheriting a mess and he needs all of the help he can get.
I will be pray for him as well; and hope that he is able to deliver as our next President of the United States of America.

Very well put. He may have the Midas touch. As Carl Rove said last night on O'reily-Foxnews, "I love my county, so I want Obama to do well."