Oh my gosh!  Just days ago, I read about a new documentary on the life of legendary coach John Madden, "All Madden."  It was released on Christmas Day, on Fox Sports.  Since I don't have streaming TV, I went looking for it... not yet available to the unwashed masses, but I hope it will be soon.

And then today... I read the news that John Madden has died!  Three days after his documentary!  Is that incredibly good timing, or horrible timing?

Part of the fun of watching the Oakland Raiders, back in the Kenny Stabler / Freddy Biletnikoff / John Matuszak days, was seeing Madden, pacing the sidelines, TOTALLY wound up by the game!  He was a football genius... but he was always pretty close to that fine line "football insanity."  Fifty years ago, he always looked like he could suffer a fatal heart attack, right there on the sidelines!

His players loved him and he always coaxed their finest performances.  Raider Nation loved him.

Of course, after he retired as a coach (it gave him ulcers... not quite as bad as a heart attack), he continued to share his knowledge of the game with fans, as an expert analyst for many years.  And if I'm not mistaken, there's even a video football game named after him.

In 2006 he was inducted into the Pro Football Hall of Fame.

I feel fortunate that I was a fan during those Raider Glory Years.  (Madden and The Snake...) 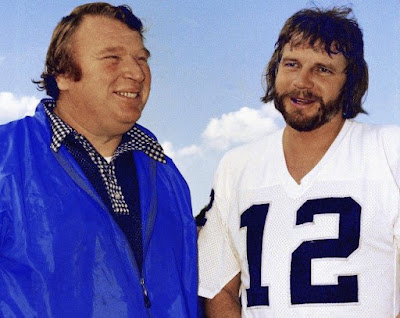 Posted by Bikeboy at 7:05 PM No comments:

Since I've called myself "Idaho Spud"...

Boise is at 43 degrees north latitude - surely the farthest-north outdoor bowl game, no?  Depending on your viewpoint, an end-of-year bowl game in Boise is either foolhardy and ill-conceived, or a move that shows tremendous foresight.  Perhaps Global Warming will push ALL the bowl games to the northern places where polar bears and glaciers once lived. 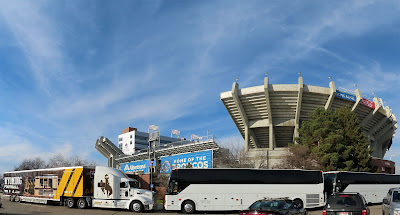 Here are a few additional photos I snapped on this, the shortest day of the year. 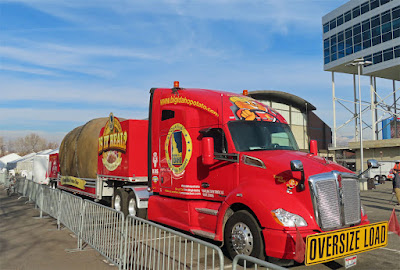 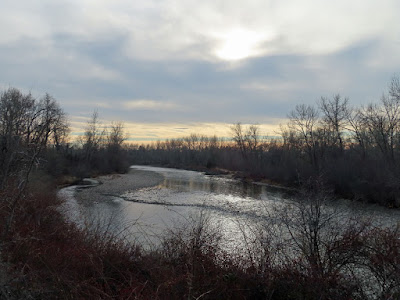 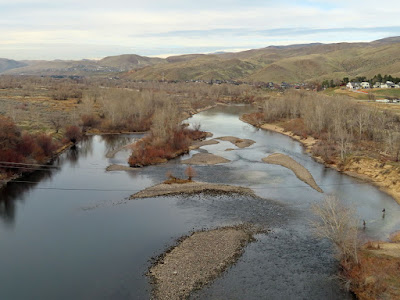 I took both of the following from the same spot, using my small camera with 40x optical zoom.  The top photo is "1x" (widest angle), the bottom photo is "40x" (full zoom). 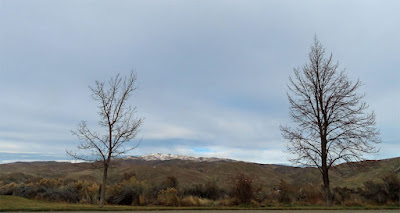 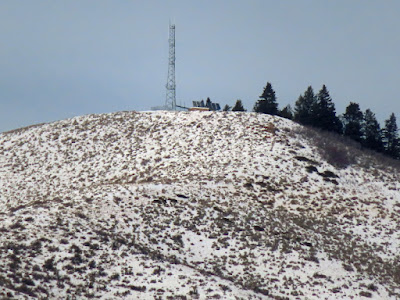 Posted by Bikeboy at 6:59 PM No comments:

Can one of you theologians or Biblical scholars confirm the accuracy of this particular interpretation? 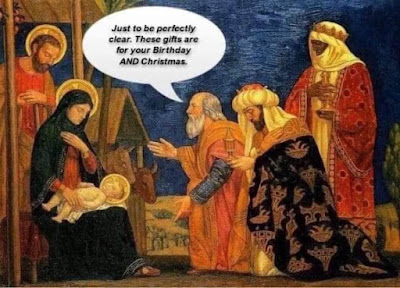 Posted by Bikeboy at 5:21 PM No comments:

What is more precious than a holiday photo of the kiddies with Santa? 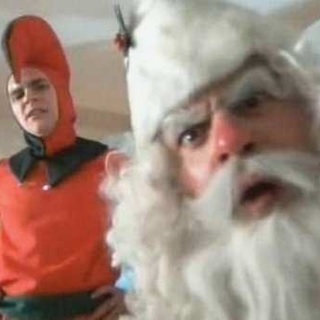 It doesn't always go as imagined.  I happened across a pretty good collection of scary Santa photos...  probably didn't make it onto the Christmas card.

Posted by Bikeboy at 8:48 AM No comments:

The beloved carol has an interesting back-story.  "Stille Nacht" was first performed on Christmas Eve 1818 at St Nicholas parish church in Oberndorf, a village in the Austrian Empire on the Salzach river in present-day Austria. A young Catholic priest, Father Joseph Mohr, had come to Oberndorf the year before.  The melody was composed by Franz Xaver Gruber, schoolmaster and organist in the nearby village of Arnsdorf. On Christmas Eve 1818, Mohr brought the words to Gruber and asked him to compose a melody and guitar accompaniment for that night's mass, after river flooding had possibly damaged the church organ.  (Details from Wikipedia)

(Traveling folk singers started performing the song, and by a year later it was quite well known around northern Europe... and by 1839 it was performed across the ocean in New York City.  The rest is history.  I guess that part is history, too.)

It has been performed in many styles over the years.  I share a few interesting interpretations here.

This voice might be my favorite upon God's green earth - Kathleen Battle, an extraordinary operatic soprano, accompanied by classical guitar-master Christopher Parkening.

Here's that same voice - Kathleen Battle - in a different setting.  On this outing, she's accompanied by trumpet genius Wynton Marsalis and his merry band of jazz troubadors.  A favorite of mine; Kathleen sings the melody in a very traditional fashion while the jazz cats do a pretty awesome, but not irreverent, jazz thing in the background.  (It's a cut from a performance called, "A Carnegie Hall Christmas Concert" - the entire concert is spectacular!)

Another jazz treatment that I particularly like is by Jimmy Smith on the Hammond B3 organ.  From 1964... the guy can cook anything!  (If you would disapprove of "non-reverent" variations, you might want to skip this one.  It's hardly a silent night!)

My favorite Elvis Christmas song will always be "Blue Christmas," but he and The Jordanaires do a fine job on "Silent Night," as well.

Who are the least-likely people to record "Silent Night"?  If you're like me, you probably thought for a minute and then said, "Um... William Shatner and Iggy Pop, I guess."  Well - here they are.  Like pretty much everything Shatner has ever recorded, I have no idea if he's serious, or just having some harmless fun.  Listen to it and assume they are both sincere!

If there's a more sublime interpretation of "Silent Night" than this one by the Cambridge Singers, please share it with me, because I have not yet heard it!

Posted by Bikeboy at 7:10 PM No comments:

My father developed an interest in bird-watching later in life.  Likewise, I've always enjoyed the presence of birds, but it wasn't until the last few years that I wanted to identify the birds I happened across.  My dad had a good set of binoculars - I inherited them - Dad didn't have an amazing camera that you could carry in your pocket, but that had a long zoom lens.  (Let's all sing together: "I love tech-no-lo-geeeeee!") 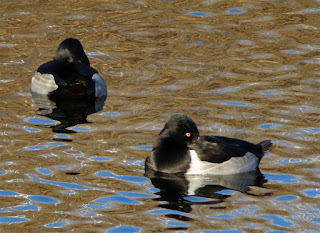 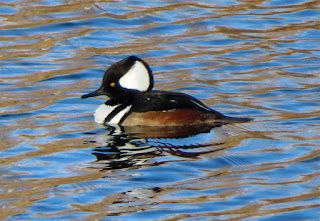 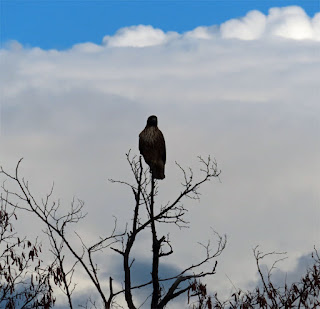 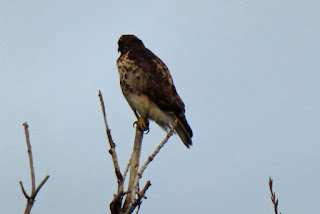 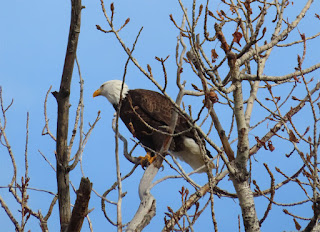 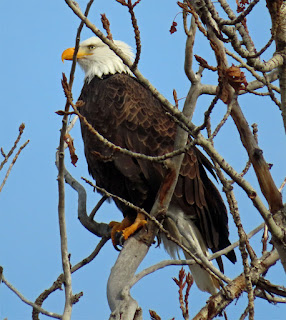 Posted by Bikeboy at 9:22 AM No comments: