My kind of cell phone!

I dislike "smart phones."  Generally.
Why?  Probably because I believe they've diminished our society in many ways.  Every day - pretty much all day - I observe people, including wonderful people who I have great respect for, surrendering their precious time to inane "smart phone activity."  (Maybe it's stuff that really appeals to them.  They'd probably argue that they're lovin' every minute!  I hope so, because I see them devoting their attention to their phone instead of the wonderful surroundings and situations they are in, and/or the people that they are with.)
- People lurching along our "crown jewel" Greenbelt - oblivious to their surroundings because their face is in their phone.
- Moms and dads at the playground with their kids - ignoring them because their attention is fixated on their phone.
- Four people sitting together at a table at a restaurant.  Between bites, they aren't enjoying cheerful repartee with their companions - they're mesmerized by four handheld gizmos.
Another thing that I don't like about 'em - people WHO ARE DRIVING - are looking at their phones instead of paying attention to their driving.  Thousands of innocents fall victim to them, every year.  And - apparently our society is comfortable with that.
Smart phones AS A TOOL are amazing things!  But they should enhance your life, NOT detract from it!  (I hope the reader understands what I'm talking about.  Any honest observer has to agree that there are a lot of people, devoting a lot of time, to a lot of "smart phones"!)
OK - rant out of the way.  Now check out this cell phone WITH ROTARY DIAL!  Oh YESSSS!  This engineer lady built it.  I think she'd sell a bunch of 'em, if she put 'em on the market - it's CUTE!  Gotta love the turquoise - my mom would!  It should also be available in white, black, ivory, and AVOCADO to match the vintage kitchen appliances!
More info HERE. 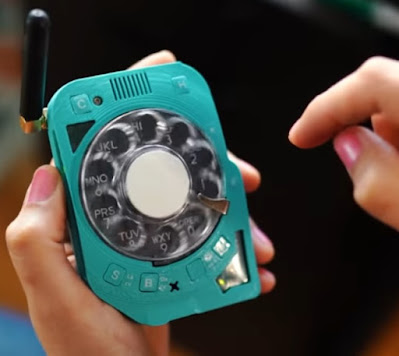